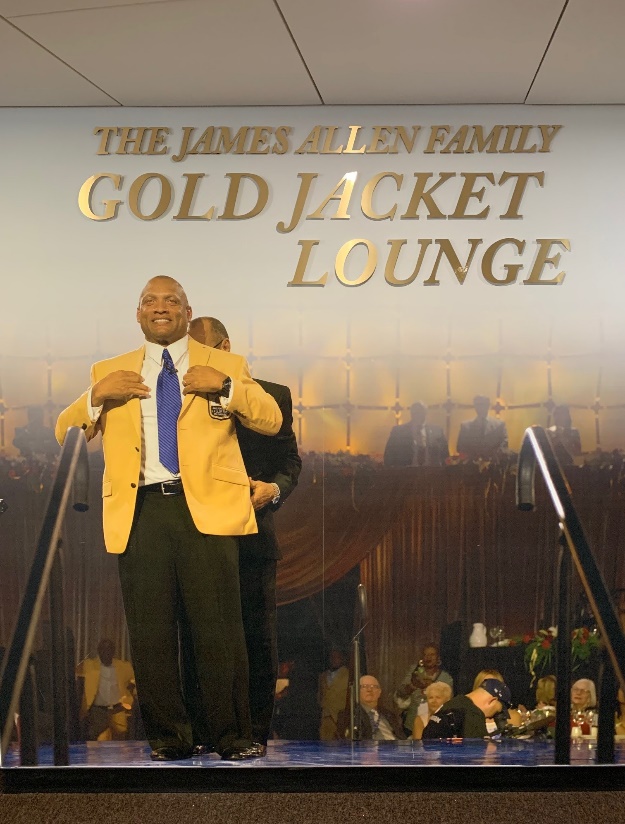 CANTON, OHIO – One of the most inspiring spaces inside “The Most Inspiring Place on Earth” has a new name.

Formerly known as the Gold Jacket Lounge, the gathering and conference area on the second floor of the Pro Football Hall of Fame this week officially was renamed the James Allen Family Gold Jacket Lounge in acknowledgement of James Allen’s devotion and commitment to the Hall.

Allen is president of the real estate and development company J. Allen Family Partners of San Antonio and leads the Wishes and Prayers Foundation. He is a proud graduate of Texas A&M University and continues to contribute to the school through an entrepreneurship program. He is one of only two members of the Hall of Fame’s Board of Trustees from the Lone Star State, along with Amy Adams Strunk, who is the controlling owner of the Tennessee Titans.

“If you sit on a board, you should contribute in some way or another,” Allen said. “We just really like what the Hall and the Gold Jackets do to touch lives everywhere.”

Pat Lindesmith, the Hall’s Chief Partnership Officer & Senior Vice President of Gold Jacket Relations, said Allen “has devoted his time and heart to the Pro Football Hall of Fame for several years as a member of the Board of Trustees and the Advisory Board. When the Hall was facing challenging times during the pandemic, James stepped up his time and commitment, and that now will be known to everyone with the renaming of a special space the Hall utilizes every day.”

The James Allen Family Gold Jacket Lounge rates among the best meeting spaces in the region, accommodating up to 120 people. Its entrance sits only a few feet from the Hall of Fame Gallery, with the Museum’s collection of Bronzed Busts, and opens onto a brick terrace adjacent to Tom Benson Hall of Fame Stadium.

“I am grateful for James Allen’s leadership, and the Hall appreciates his generosity and support, which will create a legacy for him and his family with our Hall of Famers and fans in the James Allen Family Gold Jacket Lounge,” said David Baker, President & CEO of the Hall. “James Allen believes in the Pro Football Hall of Fame, and his name shall now forever be synonymous with its Mission, Vision and Values.”

Allen is the father of three adult children: Makayla, Faith and James Jr.

Together, the James Allen Family Gold Jacket Lounge and the expanded Nash Family Event & Conference Center offer guests of the Hall of Fame unsurpassed world-class hospitality opportunities. Groups up to 450 people can be accommodated for meetings, presentations, dinners and other events. To book an event at the Pro Football Hall of Fame, call 330-588-3642.