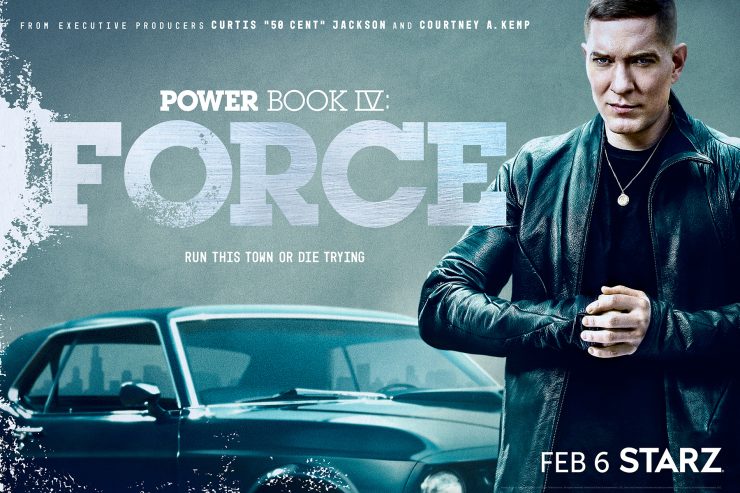 “POWER BOOK IV: FORCE” centers on fan-favorite character Tommy Egan, played by
Joseph Sikora, after he cuts ties and puts New York in his rearview mirror for good. As
Tommy leaves New York after losing Ghost, LaKeisha and, the only city he’s ever known, he makes a quick detour to close an old wound that’s been haunting him for
decades.

What was supposed to be a quick stop turns into a labyrinth of family secrets
and lies Tommy thought were long buried. One step leads to another and Tommy
quickly finds himself in Chicago’s drug game, inserting himself between the cities two
biggest crews. In a city divided by race, Tommy straddles the line, ultimately becoming the lynchpin that not only unites them – but holds the POWER to watch them crumble.

As the first season unfolds at breakneck speed, Tommy uses his outsider status to his advantage, breaking all the local rules and rewriting them on his quest to become the biggest drug dealer in Chicago.

Tommy Egan (Joseph Sikora)
Tommy Egan is a stranger in a strange land when he arrives in Chicago after putting the
wreckage of New York behind him. No longer willing to take orders from anyone, Tommy
is his own boss looking to build his own empire and become the biggest drug dealer
Chicago has ever seen.

Diamond Sampson (Isaac Keys)
Diamond is a gentle giant with truthful eyes and a body made of granite with defensive
precision, a trait drilled into him during a 15-year sentence. Before Diamond got locked
up, he was the young head of Chicago’s most promising crew that was taking over the
city. In his short time at the helm, he created a tactical drug running outfit respected by
all of Chicago’s crime families. He spent his time in prison reading the classics, educating himself on everything from history to literature to philosophy. Now that he’s
out, Diamond plans on taking the reins back from his crew’s interim leader — his
younger brother.

Claudia “Claud” O’Shea (Lili Simmons)
Claudia Flynn is the only daughter to the largest kingpin in Chicago. Astute doesn’t begin to describe her – her intellect is a mixture of Ivy League lecture halls and Chicago street smarts. She is as brilliant as a politician and as blunt as a pipe wrench to the face. Claud doesn’t need the green light or permission to set things in motion, she is the fire starter and the one person nobody in Chicago should ever count out. In a male-dominated business, Claud is determined to carve out her own path and one that might save her family in the end.

Gloria Rodgers (Gabrielle Ryan)
Gloria is a razor-sharp and stunning former Marine carving her own path in Chicago.
She’s passionate, fiery and beholden to no man. Out of the small kitchen in the back of
her bar, she pumps out Michelin-level, Jamaican-inspired dishes. Her clientele is a
revolving door of Irish mobsters looking to move in on her real estate. This doesn’t stop
Gloria’s hustle and dream of one day owning her own restaurant and being free from
under the watchful eye of the crime family that she’s entangled with. A chance encounter
with Tommy quickly causes a seismic shift in the lives of those around her that only she
can unravel.

Vic O’Shea (Shane Harper)
Vic Flynn is the heir apparent to Chicago’s largest crime family – a prince who leads with
his heart as much as his fists. Vic resents the fact that his father has mapped out his
entire life for him – both in business and in love. Vic can roll with Chicago’s wealthiest
socialites just as easily as he can get down with Chicago’s heaviest dealers. Realizing
his father has taken a shine to Tommy, Vic will fight to regain control of his rightful
position at any and all costs. Looking to move his family’s business forward and bury old
beefs, Vic’s allegiance to his family is put to the test and where he comes out on it will
impact the entire city of Chicago’s POWER structure.

Walter Flynn (Tommy Flanagan)
Walter Flynn is the head of the Irish crime family in Chicago. Despite living a life of
immense prosperity in his castle on the lake, he longs for the way things used to be.
Walter believes that without community and family, there is no tradition, and his deeply
held code of honor bleeds into every aspect of his life. As he ushered his family into the
twenty-first century, Walter quickly saw the criminal organization he built facing threats
he never accounted for.

Jernard Sampson (Kris Lofton)
Not a traditional student, but a shining star who was gifted from birth, Jenard was
accepted to Brown University within days of his older brother Diamond being sentenced
to 15 years. Jenard parked his ambitions of academia and took the reins of one of
Chicago’s largest crews. Buffeted by the benefits of Diamond being his brother and
keeper, he took power of the organization with an unbridled ability of a CEO along with
the wild energy to end anybody that crosses him.

JP Gibbs (Anthony Fleming III)
A gifted jazz musician who toured several continents, developing a rich worldliness that
comes through in his swagger and collage of diverse tattoos. JP owns and operates a
blues club with his ailing father that has been the target of several attacks by local gang
members. As rich as JP’s life is, he still carries the pain of never having had a mother in
his life and having a son he has no relationship with. JP’s world is thrown off its axis when he crosses paths with Tommy.

Darnell “D-Mac” McDowell (Lucien Cambric)
D-Mac is a young man who has been raised by the streets of Chicago’s Southside.
Independent, fiercely loyal and completely unflinching when called upon to represent his
crew, D-Mac is still a kid at heart looking for someone to take care of him. After a run in
with Tommy proves to be more than a fluke, D-Mac looks to Tommy as he hits a
crossroads in his life that can completely upend his future.

Simon (Phil Donlon)
30’s, male, a muscle head with little regard for anyone who isn’t Irish. A bulging muscle head with a hot temper in the Irish Outfit, he’s looking to make his way up the food
chain.

Adrienne (Blyth Howard)
Adrienne is a beautiful and charming crime reporter working for a digital news outlet that
specializes in investigative journalism. Adrienne has an incredible ability to read people and listen without judgement; who realizes the truth lies in areas of gray. She decided to pursue a journalism degree at the University of North Carolina at Chapel Hill then moved around the country working as a freelance journalist covering major crimes and
specifically organized crime from street level to mob bosses.. She landed in Chicago
when her knack for breaking big stories caught the eye of a digital media company set to become the next Vice. Adrienne is a woman shaped by every person she meets and
every place she lives– which is why she is drawn to ex-convict and CBI leader Diamond
Sampson. She can tell that he is a man who has lived many lives and has a story to tell
and when he decides to tell it, she’ll be there to listen.

Cousin Buddy (Freddie Gibbs)
A Gary Indiana legend. A hustler and icon who controls the drug game. Buddy is a little
crazy, and unpredictable. No one knows what or who will set him off at any point. A total
wild card, but someone that you definitely want on your team.