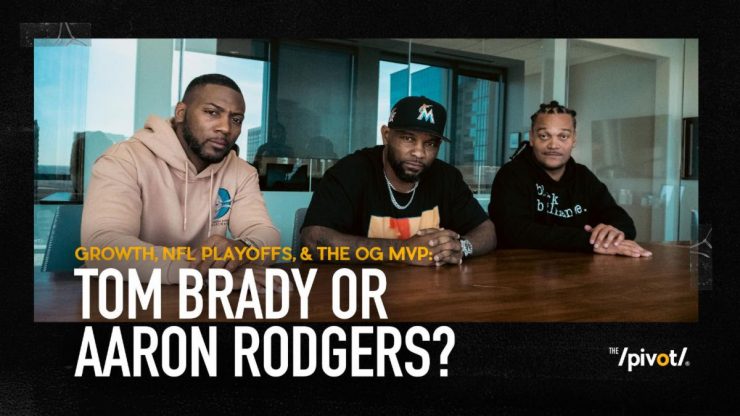 NEW YORK (January 18, 2022) – On the latest episode of the rapidly growing “The Pivot Podcast”, co-hosts Ryan Clark, Channing Crowder and Fred Taylor went deep on pertinent topics in football and beyond, debating Tom Brady vs. Aaron Rodgers, sharing playoff stories and discussing fighting both inside and outside of the locker room. Watch the new episode NOW on “The Pivot Podcast” YouTube page.

As the NFL season nears Super Bowl LVI, the co-hosts discussed and debated two of the players who will have a significant say in who hoists the Lombardi Trophy in February: Tampa Bay Buccaneers quarterback Tom Brady and Green Bay Packers quarterback Aaron Rodgers. Specifically, they share who they see as the 2021 NFL MVP. “I think Tom should win the MVP,” said Crowder. “I’m a Tom guy. He used to wear my ass out for six years. There were so many games where you looked across the field and you see him, and you’re like, ‘he’s about to destroy us.’ He looks like he’s playing football in the backyard with his kids.” Clark offered a different opinion, referencing the huge offseason story that saw Rodgers demand a trade out of Green Bay.

“Think about where that team is, what they had to do to get there, the big boy move he pulled, and then after all that, to come out and play like he did,” said Clark. “You put pressure on yourself by doing that. Everyone is talking about how you can’t hold the team hostage like Aaron did, but these teams have to understand that it’s different now in 2022.” “Some players have equity built up,” added Taylor. “He’s a veteran guy who knows exactly what he’s going to do and he’s accomplished everything. If they tried to depend on Jordan Love instead of Rodgers, they wouldn’t be in the playoffs.  Green Bay was disrespectful in how they handled it. Rodgers is the man, he deserved to get what he demanded. Look at what he’s doing. I believe he should be the MVP, because I think Tom has more weapons than Rodgers has.”

Earlier in the episode, the crew jumped into an entertaining and enlightening conversation on fighting, beginning with locker room scuffles, but relating it to society at large in their own unique manner. “It’s sad with our youth right now, that they think that the end of a fight, is going to get a gun,” said Crowder. Crowder went on to describe a fight that occurred between him and former Dolphins teammate Randy McMichael, originally stemming from an argument about their respective alma maters, the University of Florida (Crowder) and the University of Georgia (McMichael).

“We fought in the middle of the Dolphins locker room,” said Crowder. “We’re both bleeding. It had to be over five minutes. We were rolling around and everything. He thinks he won, but he was bleeding too, so I think it was a tie. Then later after everything, he gave me the head nod, we dapped up and we went out together. “The greatest conflict resolution that ever was created, was a fight. You fight another man, somebody wins, somebody loses, and that’s it. It didn’t have to go to shooting or anything like that. That’s child stuff.” “The tough guy thing, that looks immature,” said Clark. “There’s a responsibility that comes with having our platform. That’s bigger than my ego. When we do this show, or when we’re in the community, there’s a responsibility that we have to live in a way where people understand that this is how we pull each other up.” “These kids nowadays have more to deal with than we ever had,” said Taylor. “They’re looking at what people are flaunting on social media.

They don’t think first. We have to put them in a situation where we can teach them how to think and process things before they go out there and react. “If you see a kid that might be going off the path, take them off to the side and let them know, what they’re seeing on social media, isn’t reality.”

#         #         # ABOUT “THE PIVOT PODCAST”“The Pivot Podcast” debuted in January 2022 as popular personalities and former NFL stars Ryan Clark, Fred Taylor and Channing Crowder host a weekly sit-down with A-list stars from the sports world and beyond, delivering relevant football discussion mixed in with everyday topics that affect viewers globally. Rapidly approaching 100,000 subscribers after since debuting two weeks ago, new episodes drop on Tuesdays at 12 p.m. ET on their YouTube Channel, with audio also available on Apple Podcasts and Spotify. Follow along on Twitter @ThePivot and Instagram @ThePivot, as well as on Facebook and Tik Tok. The podcast is produced by Shots Studios in collaboration with RFC Productions, an Emmy-award winning team committed to bringing fans the content they desire.