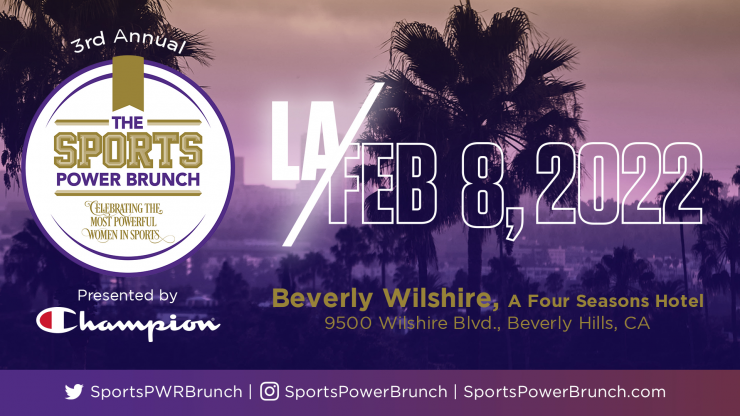 PRESENTED BY CHAMPION ANNOUNCES 2022 HONOREES RECOGNIZING LEADING WOMEN IN SPORTS, INCLUDING THE INAUGURAL
﻿”BE YOUR OWN CHAMPION” AWARD HONOREE, VANESSA BRYANT

Los Angeles, CA (February 1, 2022) – The Sports Power Brunch: Celebrating the Most Powerful Women in Sports today announced Champion, an innovator at the intersection of lifestyle and athletic apparel, as the Presenting Sponsor at the third annual event and unveiled the complete list of distinguished honorees.

The 2022 Sports Power Brunch presented by Champion will be held during the most exciting week in sports on Tuesday, February 8, 2022, at the Beverly Wilshire, A Four Seasons Hotel, in Beverly Hills, CA. Hosted by Eboni K. Williams, Executive Producer and Host of ‘REVOLT Black News,’ the event recognizes leading women who have made an indelible mark in the sports industry. This year, four groundbreaking women will be celebrated for their contributions to the field: Vanessa Bryant, President of the Mamba & Mambacita Sports Foundation; Natalie White, Senior Vice President, Los Angeles Sparks; Denise White, CEO & Founder, EAG Sports Management; and Terri Hines, Executive Vice President, Communications, FOX Sports.

Named as one of top 10 events to attend by The Atlantan Magazine, this annual event takes place during Super Bowl week in each host city. Created in 2019 by LaTonya Story, CEO of LPS Consulting PR, the 20-year sports communications and marketing professional has curated a memorable experience with this highly anticipated annual event that encourages and empowers women to continue to thrive and excel in the sports industry and beyond. Attendees enjoy a day filled with empowerment, inspired conversations and networking with today’s sports, entertainment, and business industry leaders.

“Creating The Sports Power Brunch has been a labor of love and faith,” states Story. “I could not have imagined the overwhelming amount of support and enthusiasm for an idea that has turned into reality. This year’s stellar lineup of honorees exemplify that not only can women excel in sports but shatter the glass ceiling in a male-dominated industry. I want everyone who attends the event to experience the brilliance and creativity of women and leave with the confidence in knowing that together we can move mountains.”

Headlining the list of remarkable women in sports honorees, Vanessa Bryant has been named the inaugural Be Your Own Champion Award recipient for her commitment to youth and the community through her leadership of the Mamba & Mambacita Sports Foundation. In honor of the legacy, vision and in loving memory of her husband, Kobe, and daughter, Gianna “Gigi” Bryant, the organization was founded to create a positive impact for underserved athletes and boys and girls in sports.

“The Champion brand stands for inclusion in sports, and we’re proud to support this event honoring great women leaders in sports,” said Maria Teza, Senior Vice President, Champion North America. “These leaders truly exemplify the spirit of our brand, which we call ‘Be Your Own Champion,’ by expressing themselves and playing the game by their own rules.”

Platinum Sponsor, CANTU, an award-winning hair care brand, will host the Power Player Networking Mixer as well as sponsor the Power of Spirit Honoree Award. Music will be provided by DJShai.

Each year the event donates partial proceeds to a nonprofit organization; such recipients have included The Power of Girls and Winning Edge Leadership Academy. The 2022 charity will be the American Cancer Society. Additional sponsors include National Football League, WarnerMedia, FOX Sports, NFLPA, Marcell Von Berlin, and Talley & Twine Watch Company.

The 2022 Sports Power Brunch Honorees are recognized in the following categories:

Be Your Own Champion Award Honoree presented by Champion

The event will include three informative panels with trailblazing women in sports:

·       Dealmakers – She Changed the Game presented by Champion

·       Self-Care & Wellness for Women in the Workplace presented by WarnerMedia