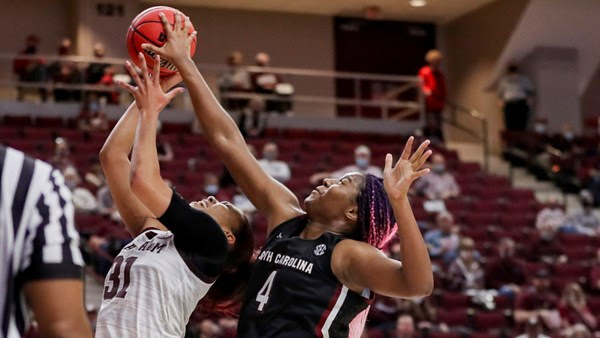 A unanimous first-team preseason All-American entering the season, Boston was The Athletic National Player of the Year in 2021 and became the first player to repeat as the Lisa Leslie Award winner. She averages a career double-double overall (13.1 ppg, 10.4 rpg), in SEC games (13.2 ppg, 11.3 rpg) and in 28 games against ranked opponents (13.7 ppg, 11.5 rpg). A unanimous First-Team All-American and the only player named a finalist for both the Naismith Trophy and Naismith Defensive Player of the Year last season, she was 13th in the NCAA in rebounding average (11.5), 18th in blocks per game (2.6) and fifth in double-doubles (17). Boston already ranks eighth in program history in career double-doubles (30) and fifth in blocked shots (167). Her 16 career double-doubles in SEC play are third-best in program history.

Cardoso joined the Gamecocks after a standout freshman season at Syracuse, during which she captured ACC Freshman and co-Defensive Player of the Year honors and a spot on the All-ACC First Team. Her 13.6 points per game ranked 16th in the ACC behind a .576 field goal percentage that came in second in the league, and she was ninth in the conference with 8.0 rebounds per game. Cardoso posted five double-doubles and 20 double-digit scoring games, including three 20-point outings. Part of the 2020 signing class, Cardoso finished her career at Hamilton Heights Christian Academy as the No. 1 center and the overall No. 5 player in the class.

A national committee of top college basketball personnel determined the watch list of 20 candidates, and college basketball fans are encouraged to participate in the Fan Voting presented by Dell Technologies in each of the three rounds. In late January, the watch list of 20 players will be narrowed to 10 and then to just five in late February. In March, the five finalists will be presented to Ms. Leslie and the Hall of Fame’s selection committee where the winner will be selected.

The Preseason No. 1 Gamecocks will host Benedict in an exhibition game at Colonial Life Arena on Mon., Nov. 1, before officially opening the season at AP Preseason No. 5 NC State.

Fans interested in buying season tickets for the Gamecocks’ 2021-22 season can find more information at https://thegamecockclub.com/wbb/ or by calling the South Carolina Athletics Ticket Office at 1-800-4SC-FANS (472-3267). Single-game tickets and season mobile passes go on sale to the general public beginning Fri., Oct. 29, at 10 a.m.

Continue to check GamecocksOnline.com and the team’s social media accounts (@GamecockWBB) for the most up-to-date information on the women’s basketball season.