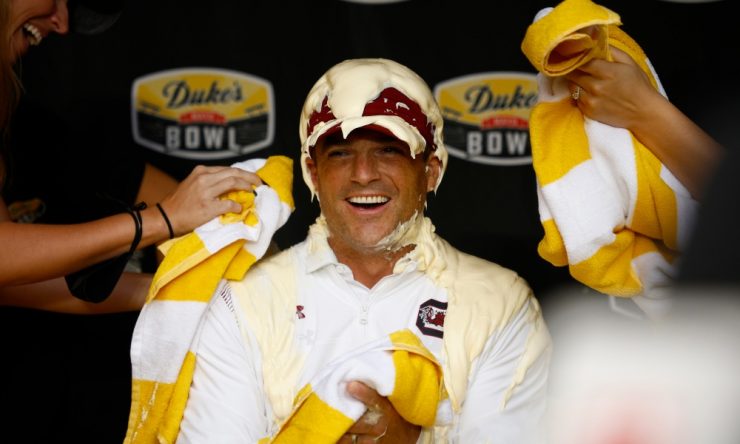 Walking into the stadium, something felt different. The energy level from Gamecock fans was electric and it just felt as if today would be their day.

Fast forward to the Gamecocks opening drive and Dakereon Joyner at quarterback. Many people thought it was merely a gimmick to catch the defense off guard. Little did anyone know he would have a dominating performance that would propel the Gamecocks to victory.

The former 4* QB had a back footed pass to a wide-open Jaheim Bell for the games first score, a 69-yard reception. Zeb Noland would later connect with Bell for another 66-yard score. DK Joyner would finish the day a perfect 9-9 passing for 160 yards. Jaheim Bell finished the day with 5 receptions for a career high 159 yards and 2 scores.

The Gamecocks offense was dominant. They set a program high for yards in a bowl game as well as rushing yards, with 301 on the ground. Kevin Harris finishes his Gamecock career with a 182-yard rushing performance, another SC bowl game record.

Today’s victory capped a surprising finish to an unexpectedly successful first season under first year head coach Shane Beamer. This team was projected to win no more than 3 games and won 7, more than the 2019 and 2020 seasons combined. The program will look to carry this positive momentum into next season, as the future appears very bright for this South Carolina program.