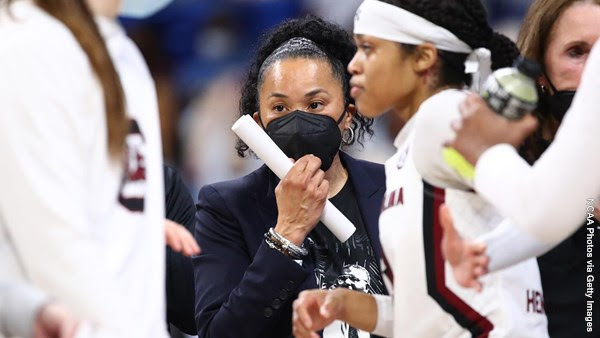 South Carolina women’s basketball head coach Dawn Staley announced “Net Worth” as the Gamecocks’ 2021-22 season theme at the team’s open scrimmage Friday night at Colonial Life Arena. The program develops an annual theme to amplify the team’s goals and mindset for the season ahead.

“Net Worth” taps into the universal symbol of success in basketball – cutting down the nets. Each member of the team, the program and the fan base plays a role in the march toward achieving that level of success. Every role is not the same, but every person has a “Net Worth” – an added value necessary for the team to achieve its goals.

Staley returns all 12 members of last season’s NCAA Final Four and SEC Tournament champion team, all of whom added a year of experience playing as a top-five team, getting every opponent’s best shot. As her No. 1 Class of 2019 signees have matured into juniors, Staley added the No. 1 Class of 2021 recruits to the mix as well as the reigning ACC Freshman and Defensive Player of the Year. Of the 16 Gamecocks on the roster, 13 have earned national or conference recognition either in high school or college.

Unanimous first-team All-American and The Athletic National Player of the Year Aliyah Boston leads the awards list, adding two-time Lisa Leslie Center of the Year and two-time SEC Defensive Player of the Year to her accolades. Junior guard Zia Cooke joined Boston in All-America recognition and on the All-SEC First Team last season and went on to be named 2021 NCAA Hemisfair Region Most Oustanding Player and to the Final Four All-Tournament Team. Senior Destanni Henderson has proven to be a consistent menace in the post season, collecting SEC All-Tournament Team honors the last two seasons. Often unsung forwards Victaria Saxton and Laeticia Amihere announced their future impact on the team in the 2021 NCAA Tournament, grabbing NCAA Hemisfair Region All-Tournament recognition. In addition to transfer Kamilla Cardoso bringing her ACC honors to the team, newcomers Raven Johnson and Saniya Rivers each picked up at least one high school national player of the year recognition prior to their arrival in Columbia.

Fans interested in buying season tickets for the Gamecocks’ 2021-22 season can find more information at https://thegamecockclub.com/wbb/ or by calling the South Carolina Athletics Ticket Office at 1-800-4SC-FANS (472-3267).

Continue to check GamecocksOnline.com and the team’s social media accounts (@GamecockWBB) for the most up-to-date information on the women’s basketball season.