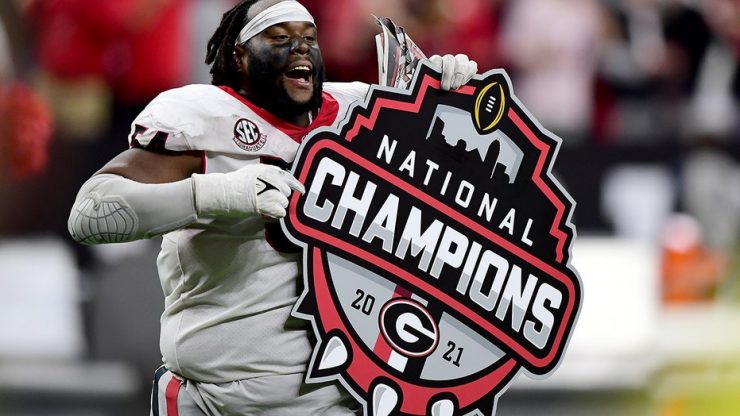 With less than a minute left in the game, as Bryce Young and the Alabama Crimson Tide were driving down the field to tie the game up, a pick-six from Georgia’s Keelee Ringo returned for 79 yards sealed the game for the Bulldogs.

The play left Georgia quarterback Stetson Bennett, a former walk-on, in tears on the sideline with everything he had worked hard on coming to fruition. As soon as the clock expired, Georgia’s assistant coaches and staff bolted to the elevators in the shaking press box at Lucas Oil Stadium, with happiness and excitement as they thundered out cheering together.
On the field, coach Kirby Smart said he hugged 89-year-old Vince Dooley’s neck—the last coach at Georgia before Smart to win the national title—and they were both in tears.
An emotional Stetson Bennett said this about winning the title: I hadn’t cried in years, but that just came over me,” said Bennett, who overcame a slow start to lead the Bulldogs’ fourth-quarter charge and was named offensive player of the game.”  That’s what it means when you put as much time, blood, sweat, and tears into something as we do.”

Alabama and Georgia have had a long history of facing each other when the game matters most, with one coming this year in the SEC Championship and the 2018 National Championship game, which Alabama both won. But, this time, the adage holds true: the third time is a charm. That was the group that was crying in the locker room, “Smart said, referencing former players from the 2018 team that lost in overtime to Alabama, including Cleveland Browns running back Nick Chubb, Browns cornerback Richard LeCounte, and Lions running back DeAndre Swift. “This group made it right for them.” Georgia had an amazing year with a franchise record 14 wins, proving to be one of the most consistent teams in the SEC and NCAA.

Alabama’s streak of seven wins in the series, a streak that began in 2008, was broken. Alabama coach Nick Saban is now 25-2 against his former assistants, with both losses coming this season: Monday night against Georgia’s Smart, who served under him at Alabama, and during the regular season against Texas A&M’s Jimbo Fisher, who was Saban’s offensive coordinator at LSU. Alabama Head Coach Nick Saban had this to say about Georgia Head Coach Kirby, “I love Kirby,” Saban said. “I think Kirby has a lot of respect for us. He did a great job for us for a long time. If we had to lose a national championship, I’d rather lose one to one of the former assistants who certainly did a great job for us and has done a great job for his program and his team.”

“I’m really proud of him. And I’m proud of the way he’s been able to coach his team and the consistency that they’ve played with all year.”

Now that the college football season is over, we can look towards how teams will recruit and build towards a playoff title win and stop Georgia from winning back-to-back titles.

The old adage is you build a good football team from the inside out, which seems to be the approach that Shane Beamer takes with his South Carolina football team. The Gamecocks have recently added commitments from...