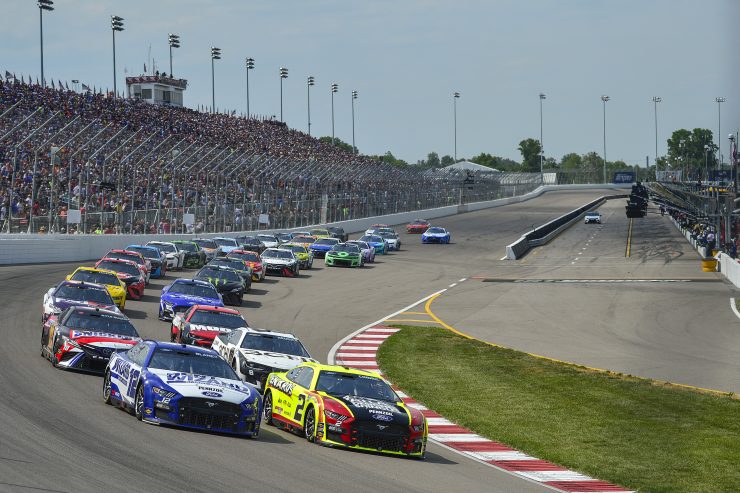 In 1991, NASCAR made its stop at the Sonoma Raceway (back then called Sears Point International Raceway). Nothing is out of the ordinary, qualifying goes off without a hitch, and Ricky Rudd is on the pole. Davey Allison, NASCAR’s new hot shot, qualifies as a modest thirteenth. Mark Martin, a former ASA driver and in his fourth year with Jack Roush, lines up alongside Davey, and our last driver, Tommy Kendall, a road course ringer, qualifies fifth. These four drivers make up one of the more forgotten controversies in NASCAR’s history when NASCAR penalized the bump-and-run.

You might be quite shocked to read that phrase. Why would NASCAR penalize the bump and run? You would be forgiven for thinking that the bump and run was a self-policing problem, as if you bumped somebody, you can expect a response at the next race. This was different; let’s start a few laps before the controversy. Mark Martin and Tommy Kendall were battling for the lead late into the race. Davey Allison was gaining ground on the dogfighting duo and was waiting for the right moment to go for a move; however, Kendall would make contact with Mark Martin, spinning him. Kendall had left front damage that killed his race. Davey and Rudd eased by Kendall and assuming the top spots. It would come down to Allison and Rudd. Coming to the white flag, going into turn eleven, Rudd makes a move on Allison and bumps him, spinning him. “Well, Davey ain’t winning this one, he’ll get Rudd at the next race”, many people in the stands probably thought.

However, coming to the checkered flag, Rudd receives the black flag, and Davey receives the checkered flag. Davey’s team didn’t celebrate as they thought they had finished second, but Rudd and his crew chief, Waddell Wilson, weren’t happy with NASCAR’s decision. Confusion was rampant in the garage. Dr. Jerry Punch, who was pit reporting for ESPN at the time, asked Wilson about the call to black flag Rudd and this is what he said “You know I don’t understand this you know, I have been racing since sixty-three (1963) and this is about one of the durndest calls I have seen made in a long time. You know they’ve told us in the drivers meeting, the last lap your on your own, but Ricky was not driving dirty, he touched him sure but they are in a hairpin turn. … If they (NASCAR) take this away from us, this is totally wrong, I’ve seen it happen time and again through the years and they’ve never taken a race from no one doing this. If they do this, this is rotten ”. Larry McReynolds, crew chief for Davey, would be interviewed  and say that he agrees with NASCAR on their decision to black flag Rudd as “…this isn’t Rudd’s style”.

What possessed NASCAR to penalize this maneuver, no one will ever know. It was NASCAR being NASCAR, consistently inconsistent calls. Rudd’s 1991 season finished strong with a second-place points finish. Davey would rack up five wins and third-place points finish (it seems like Rudd lost the battle but won the war). Martin would finish a modest sixth. Tommy Kendall would only race Sonoma that year, but what a race to have your name attached to. Thankfully, NASCAR has not repeated a call like this since then. Perhaps they learned that some problems don’t need administrative intervention. The bump-and-run is still used and talked about today (look at the 2022 Throwback Darlington race), and we can expect it to be around for years to come.