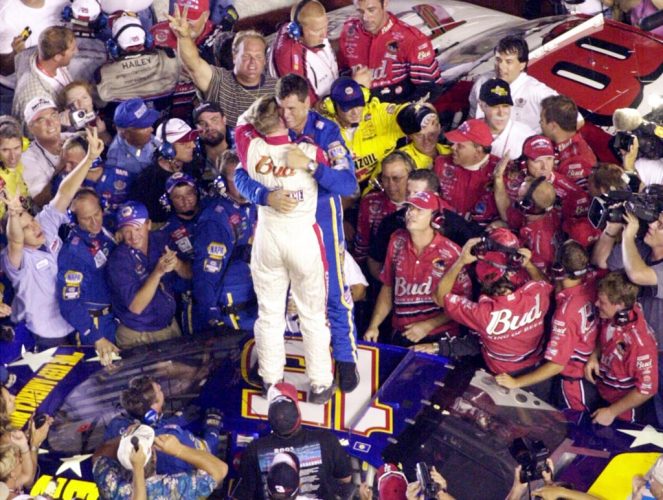 For many NASCAR fans, 2001 is a very sore year. It started wrong with the tragic death of Dale Earnhardt. For many, they thought this event would be the downfall of NASCAR. After the Daytona 500, the sport mourned. Much like Aryton Senna and Roland Ratzenberger in F1, how could a sport move on from such a tragedy, or could it? However, they still had the season to get through, so the sport must go on. The first sign NASCAR could move on was the next race at Rockingham. Steve Park would win over Bobby Labonte in a fiery battle, the first win for the young driver. Atlanta would be the second sign as Kevin Harvick, the man that took over for the Intimidator, would win over Jeff Gordon in a mirror of Dale’s victory over Labonte the previous year; this win was Harvick’s first in the Cup series.

In the back of everyone’s mind was Dale Jr. Would he win this year? Would he be able to carry the torch for the organization that his father had built? These questions permeated for five months, just before NASCAR’s return to Daytona for the 4th of July race, the Pepsi 400; the first time NASCAR has been to Daytona since Dale’s death. A dark cloud hung over the track: drivers, teams, and fans unsure of what this race would hold. We focus on the two Dale Earnhardt Incorporated (DEI) drivers of, Dale Earnhardt Jr and Michael Waltrip. Up until Daytona, DEI has struggled badly. They would have good races, but the team was rudderless. Qualifying for the 400 was more or less the same. All three DEI teams would struggle to qualify, with none of them in the top ten. Jr was thirteenth, Waltrip was twenty-second, and Park was twenty-sixth. However, the race couldn’t have been any different from qualifying. Unfortunately, Park’s race wasn’t the greatest, but the cars of Earnhardt Jr and Waltrip would come alive.

Dale’s car was unstoppable. The car was running on all cylinders and had led 112 laps when the last caution flew, roughly 73% of the race, utter domination. Just before the race would go back green, Jr sat sixth, and Michael sat fourteenth. They had a great race, which was a good show for DEI. Both drivers had top three, and top ten cars and could walk away with their heads held high. However, Jr and Waltrip would not settle for that. After the restart, Jr would slice his way through the leading cars, with Waltrip doing the same. Out of turn four, with 4 to go when they come to the line, Jr takes the lead away from Johnny Benson. With two laps to go, out of turn two, Waltrip will barrel his way past Bobby Labonte to take the second spot and tucks right behind Jr. In a mirror of the 500, Jr and Waltrip would run first and second.

The call by NBC’s commentators Allen Bestwick, Benny Parsons, and Wally Dallenbach, Jr would be frantic and iconic as the cars clicked down the laps. The fans do not believe what they are seeing: Jr, who lost his father at the same track just five months ago, and Waltrip, who won that race and lost his friend and boss, is now running one and two once more. Allen Bestwick gives the call, “Here they come to turn four, the final lap of the Pepsi 400, Michael Waltrip in second, but it’s going to be Dale Earnhardt Jr, using lessons learned from his father to go from sixth to first and score the victory in the Pepsi 400”! Daytona International Speedway lit up with screams, tears, and joy as the two DEI cars ran their cool-down lap. The celebrations were made all the sweeter as on the front stretch, Jr., and Waltrip would park next to one another and celebrate with their teams. This is where that famous image of Dale and Michael hugging each other on top of their cars.

There is a reason why many NASCAR fans hold this race in high regard. For many, this race proved that NASCAR could carry on from the tragedy of Dale Sr.’s death. This race was the last healing moment for NASCAR: Park proved DEI could win in Dale’s absence at Rockingham, Kevin Harvick proved that Dale’s team could win, despite their loss, at Atlanta, and Dale Jr. confirmed that he could win and that he and the team were here to stay, at the same track that took his father.