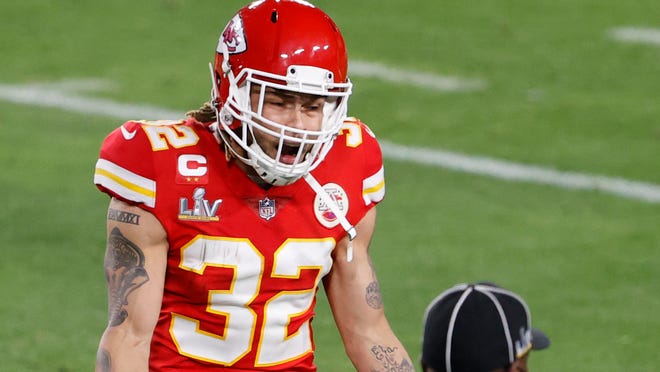 Commissioner Roger Goodell honored three heroes to start the Super Bowl. Trimaine Davis, nurse manager Suzie Dorner and Marine veteran James Martin took part in the coin toss. The trio was picked for embodying the NFL’s message of “It Takes All of Us” this season. Davis made sure to get his students and their families in Los Angeles devices and internet access, and he also hosted tech workshops to help people learn how to use the devices. Dorner, who lost two grandparents to COVID-19, is the COVID ICU nurse manager at Tampa General Hospital and represents healthcare workers across the country as honorary captain. Martin helped veterans, high school athletes, and local youth connect virtually through the Wounded Warrior Project and by live streaming events in Pittsburgh. He volunteered to live stream every home football game for Aliquippa High School so families could watch. He also has taken in needy children in his neighborhood. This gesture from the NFL capped off the incredible job of how the league has been able to complete the entire season without having to cancel any games despite playing during the pandemic.

This game had so many storylines going into it. I’m sure you have heard them all by now, so I won’t regurgitate them. The story of the first half was the penalties on the Chiefs. Kansas City was called for eight costly penalties in the first half that took the life out of the team. The Chiefs mentally could not maintain the level of focus they needed to compete with what the Bucs were throwing at them. Brady was able to capitalize on a blown coverage, finding Gronk for an early touchdown. The second touchdown came after some questionable penalties on the Chiefs. The first penalty negated an interception by Mathieu and caused a verbal spat between him and Brady. The Chiefs then forced the Bucs into a 40-yard field goal but was nullified by another Chiefs penalty. Brady then connected to Gronk again for their second touchdown of the night. Kansas City never recovered.

We have to acknowledge the job Todd Bowles, and his defense did on the biggest stage of them all. Hill torched the Bucs the first matchup of the year for 200+ yards in the first half but only had 61 yards tonight with 3:48 seconds left in the game. Pat Mahomes, who reportedly will need toe surgery in the offseason, was running for his life all night long! The Bucs looked like the hottest team in the NFL for the last eight weeks. Tom Brady put his stamp and DNA on a team that didn’t even make the playoff last year. His legend continues to grow as the greatest quarterback in NFL history! He’s now 7-10 in the Super Bowls, which one can argue is the most impressive accomplishment from any athlete! It’s hard to imagine that these two teams won’t be back into this position next year as well. There’s rumor that Bruce Arians will walk away from coaching again and give the keys to the boat to Todd Bowles. The Bucs are one of the few teams that have a majority of minority coaches on staff who all are eligible for head coaching positions in the near future. Bowles’ opportunity might come sooner than his colleagues. Tampa will now enjoy the fruits of having a Super Bowl MVP as their quarterback going into next season. Having Tom in your back pocket will ease the pain if they lose a Super Bowl winning head coach in the offseason.

Kansas City will go back and retool. Nobody believes this team won’t be back in the same position next year. Some may question if Kansas City was distracted coming into this game. A 5-year-old remained in critical condition Saturday night in the wake of a multi-vehicle crash involving Kansas City Chiefs assistant coach Britt Reid, according to police. Reid, the son of head coach Andy Reid, was involved in a crash Thursday night that sent two young children to the hospital, authorities said. After the game, Andy Ried said that his heart bleeds for the family, but he didn’t believe it affected the team from a football standpoint. As I mentioned earlier, the Chiefs lost this game when they started focusing on the refs instead of the Bucs. Pat Mahomes stated in the post-game presser that “penalties in football games especially when you’re struggling to get drives going and get into the endzone.” The Bucs played a superior game tonight from start to finish. They capitalized on every miscue from the Chiefs and forced them into a lot of uncomfortable 3rd and long situations. Brady will receive the bulk of the recognition, but that defense was the ultimate story of the Super Bowl. Congratulations to the Tampa ( Tompa) Bay Buccaneers.