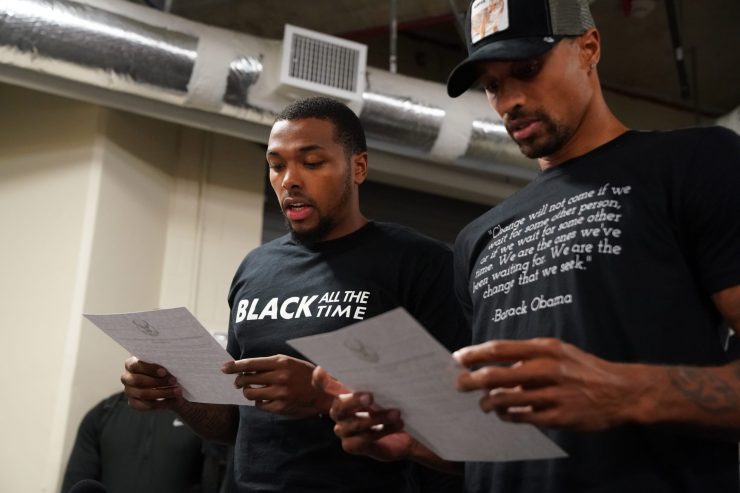 It’s August of 2020, and I’m just returning from a failed trip to the store in search of toilet paper and Mexican corn to use a side for street tacos. I remove the frozen sprite from the fridge and place it on the cool grey and black granite countertop while my daughter stares in fear at the television. Another shooting happened, and now my princess is questioning if I should ever leave the house again as she imagines her father as the victim currently on the big screen. After our conversation, I hungered for some content to take my mind off the current tragedy and stop the thoughts.  I needed sports!

All sports fans were coming off of one of the most extended summers ever! Sports were starting to emerge after we collectively watched the greatest basketball player ever in an 11-part docuseries. I grew tired of debating with a group of individuals who feel like the greatest ever is a guy they associate with royalty. Tonight was the real deal! It’s the playoffs! I’ve heard rumblings that players were collectively coming up with a way to display their displeasure with social injustice. The Milwaukee Bucks decided to take matters into their own hands and go rogue. I then received a text saying, “ The Bucks are refusing to play tonight.” I was floored! I then turned to NBA TV and watched everything unfold in a way I never thought I would witness. The NBA stopped! The players have paused the playoffs!

Other leagues followed suit and decided to suspend play in the wake of the most recent shooting. This occurrence is unprecedented for numerous billion-dollar industries to agree that bringing awareness to social injustice might be more important than playing a game. Most fans of sports have a Gladiator mentality and crave to be entertained no matter the circumstances. It’s proven that weather, injuries, personal issues, or a pandemic shouldn’t be an excuse not to engage the sports audience. However, for twenty-four hours, social injustice awareness stopped the entertainment. One can debate if that timeframe was too soon or if it even melted an ice cube in a pool of racism. You can even argue if those NBA teams really even considered completely stopping and nearly popping the bubble. I personally don’t look to any athlete as someone to stop racism. They are more equipped to stop the WR from getting into the endzone or the athletic point guard from getting into the lane. They shouldn’t be placed that type of weight on their shoulders.  We all need to play our role in order to win this game, and it feels like we’re only in the first quarter. It’s going to take more than athletes to beat this opponent. You’re going to have to stop what you’re doing and do what’s right!