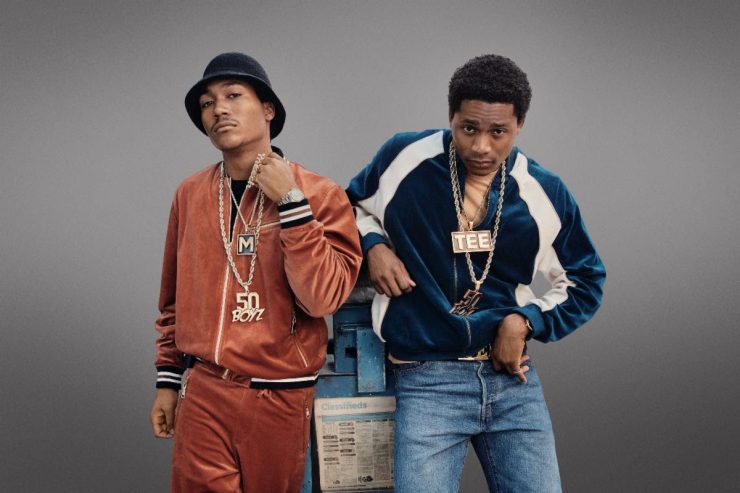 About BMF: BMF (aka Black Mafia Family) is inspired by the true story of two brothers who rose from the decaying streets of southwest Detroit in the late 1980’s and gave birth to one of the most influential crime families in the country. Demetrius “Big Meech” Flenory’s charismatic leadership, Terry “Southwest T” Flenory’s business acumen and the fraternal partnership’s vision beyond the drug trade and into the world of Hip Hop would render the brothers iconic on a global level. Their unwavering belief in family loyalty would be the cornerstone of their partnership and the crux of their eventual estrangement. This is a story about love, family, and capitalism in the pursuit of the American dream.

Meech’s and Terry’s father, who’s a God-fearing, hard-working man that goes from one  shift as an auto worker to another job as a maintenance man — and still doesn’t make  enough money to keep his family afloat. Charles clashes constantly with Meech, whom  he considers a bad influence on his “good” son Terry, until he discovers that Terry is  actually working with his brother in the drug game. He tries to convince his wife, Lucille,  but she’s not hearing him and more tension develops in their relationship. Eventually,  Charles will learn that his wife has been hiding the fact that their home is in foreclosure.  He stubbornly refuses to accept Meech’s “tainted” money — despite her pleas to let  Meech help.

Meech and Terry’s mother, a hard-working, religiously devout, stern but loving woman  who tries to run a decent, God-fearing household despite privation and poverty. Lucille  has no idea how Terry has already been subsumed into the drug trade, or that the gun  she finds in her sons’ bedroom is actually Terry’s, not Meech’s, as she assumes. She’s

blinded by her desire for Terry to become the first male in their family to graduate high  school. Lucille has also been keeping the fact that the house is in foreclosure secret  from her husband, Charles, because she doesn’t want to add to his already enormous  stress level. However, she wishes he would bend and accept the cash from Meech that  would solve their problem, and she becomes frustrated when he refuses to do so.

Charming and ambitious, Demetrius is a Detroit Street legend in the making. A high  school dropout, who is hungry for his slice of the American dream. Meech always thinks  three moves ahead. As a result, he quickly advances from a corner boy to a mid-level  man on the make. He’s determined to lift his family out of poverty by becoming the King  of Detroit and more, by any means necessary.

Meech’s younger brother, who is a high school student and the apple of his parents’  eyes. They have no idea that, after school, Terry is a gun-toting crack dealer who is very  much a part of his brother’s growing drug operation. Unlike the calm and collected  Meech, Terry is a hothead who believes in standing his ground. Excited over the recent  birth of his baby son, he’s unaware that life is about to deal him an unexpected blow — when he is waylaid outside his girlfriend’s house.

She’s a “Southern belle with grit,” that is carrying a dark secret. Kato is one of Meech  and Terry’s “corner gang” who sells drugs for the brothers. She gets into trouble with  Terry when she discounts their product, arguing that they’re not making sales because  their crack has gotten too expensive.

A fearsome thug in a doo-rag, who has recently returned to the neighborhood after a  stint in a mental hospital. Lamar, was locked up there instead of going to prison, where  he really belonged. A legend in his own time and a casual killer, who becomes livid when  he sees Meech leaving his girlfriend’s house. Lamar becomes even more incensed when  he discovers that Meech and his crew have taken over the crack trade that he left two  years ago. He’s out to return things back to the way they used to be, by any means  necessary, which puts him and Meech on a collision course.

Meech’s former baseball coach, who is also a police officer. He does favors for Meech  and gets laced with cash in return. The question is how long can a person protecting and  serving the community continue to play both sides of the fence.

Meech and Terry’s neighbor, who both confide in a call on whenever they’re in a jam.  Roland has been friends with both Meech and Terry since they were kids, so he’s smart  enough to stay out the middle of their sibling rivalry.

Seen in 2005, he gives Meech a hero’s welcome back to the old neighborhood — along  with hundreds of other friends and fans.

Meech and Terry’s little sister, who helps maintain the brother’s secret – that Terry is  selling drugs with Meech. Nicole is a bright and personable young lady with a smart  mouth, who constantly lives in the shadows of her brothers so she begins to act out for  attention.

She’s Meech and Terry’s little sister, who loves to dance and get in the middle of her  brother’s rivalry.

He’s the proprietor of the local barber shop — actually a front for a drug and after-hours  spot. He has a real affection for Meech, whom he has taught everything he knows about  the drug trade. But he insists that they go slow when it comes to slinging rocks — and  Meech is getting impatient with Pat’s old school views. He thinks it’s time that he and  Terry branched off on their own — but how Pat will react to their independent streak  remains an open question.

Terry’s girlfriend and baby’s mother, who is doing everything she can to hold on to the  first man she’s ever loved. She knows Terry loves her and their newborn son, but  Lawanda also knows that he loves running with his brother Meech. As the drama  escalates with the Flenory brothers’ the drug war on the streets, the question becomes  does Lawanda ride it out with her man, or seek refuge for her and her child.

She’s a sultry, sexy woman who is having a torrid affair with Meech. What he doesn’t yet  realize is that she is the ex-girlfriend of Lamar, and the mother of his young daughter.

Brian Mickie or B-Mickie as he’s affectionately known on the streets is the third wheel of  Meech and Terry’s drug partnership and he’s been down with the Flenory brothers since  day one. A “street-lifer, philosophizing stoner” who has more than a propensity for  violence. B-Mickie’s a shooter. He’s a Master Chef in the kitchen when it comes to  cooking cocaine into rocks and he’s secretly sleeping with someone that could  jeopardize the integrity of their crew.

An older member of Jay-Mo’s gang with quick wits and a slick tongue. We’ll also  discover that Slick has history with another imposing figure in the streets, who he’ll help  overturn the balance of power.

Jay-Mo is the leader of the 12th Street Boys, who are Meech and Terry’s biggest rivals.  Seeking more muscle, he tries to recruit Lamar into his gang – but Lamar is strictly a  lone wolf – for now.

Pastor Swift is the spiritual advisor of the Flenory Family. He is a man of The Word with  the aura of an ex-con who believes in the power of the Lord. He helps the family  welcome Terry home. Pastor Swift eventually ingratiates himself into every part of the  Flenory’s life, helping the family find a lawyer, and becoming a confidant.

She is the wife of a flamboyant drug dealer that Meech and Terry befriend. She sees  something in Terry, a seriousness and sense of purpose she feels she can harness to  make herself rich and powerful. She develops a friendship with him and his confidant  and eventually, his lover, putting everything Terry has built out on the streets at stake.

Lori Walker is Demetrius Flenory’s girlfriend, who is also the mother of his child “Neeka.”  Walker is a smart, driven, yet naive college athlete who once fell for Meech’s bad boy  charm. Walker is more mature and clear-eyed now. Her world centers more around her  daughter, and she expects less out of Meech, which makes him want her more.

Tiny is a street smart guy who is all about his money. He is the nemesis of Meech and Terry, until Meech makes him an offer he can’t refuse.