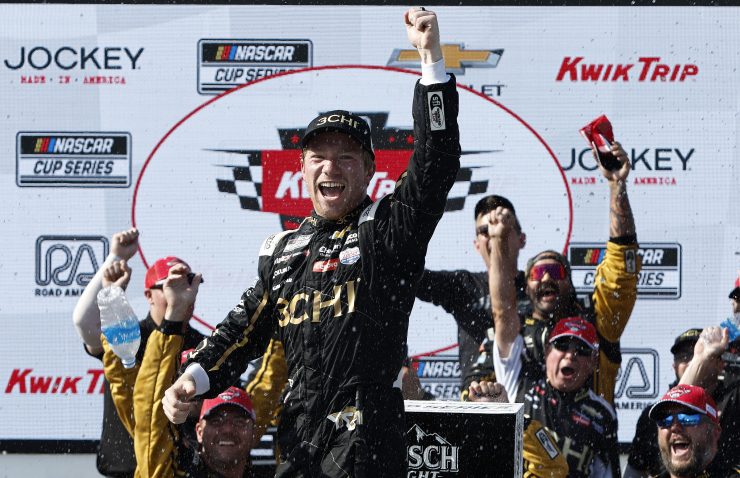 It has been a season of firsts since the LA Coliseum in February. NASCAR introduced a new car to the Cup Series, and the Next-Gen car has not been disappointed so far. Joey Logano won inside a famous football stadium in California, and a rookie named Austin Cindric won the Daytona 500. After today’s race at Road America, the Cup Series has five first-time winners this season.

Tyler Reddick has been a driver in waiting all year. Five runner-up finishes and a string of bad luck have kept him from victory lane several times. Today, Tyler Reddick won at Road America, beating the sport’s best road course racer in Chase Elliott. Reddick took the white flag at the Bristol Dirt event but was spun by Chase Briscoe in the final turn, allowing Kyle Busch to win and give Reddick yet another runner-up finish.

For Reddick, it’s his first career Cup Series win, and it comes with such sweet rewards. Reddick is now in the Playoffs with the win, and now the monkey is off his back. Yeah, we just threw the monkey his wrench, and I will explain why. Reddick became the 13th different winner this season, with eight races until the playoffs. So let’s throw some of those wrenches into the cog and see what breaks first.

Scenario #1: The Playoffs begin with 16 or fewer drivers winning a race. This means that every driver who won a regular-season race in the Top 30 in points qualified for the Playoffs—nothing crazy.

Scenario #2: There are 17 winners in the regular season, and tie-breakers set the Playoff field. For this scenario, we have to find four more winners, so let’s say that Ryan Blaney, Martin Truex, Jr., Kevin Harvick, and Christopher Bell get wins before the Playoffs. In this scenario, the driver that misses the Playoffs is Daniel Suarez. The tie-breaker goes to the driver with the most wins, and if that is also a tie, then the driver with more regular-season points makes it. So in this scenario, as the points are now, Kevin Harvick would knock Suarez out because Suarez has the least amount of points with a win. But if the number of drivers hits 18, then the process would continue, and Chase Briscoe is the next lowest in points with a win.

There are four drivers with fewer points and a win than Tyler Reddick, and I wouldn’t bet on getting seven or more new winners in the last eight races, but this season has been all about firsts, so I think it’s worth it at least talking about. For Reddick, the clinching win for him will happen possibly in two weeks with no more new winners before then. Even with this win, he must stay focused on the points and get all he can weekly. It’s always a blessing to get that first win but taking a break after it is the worst thing you can do.

Next week is another trip to Atlanta, a track that Kevin Harvick has dominated in the past, and with a 61-race winless streak in the back of his mind, I expect Harvick to push hard for a win. The Ford camp has not been impressive this season, though, and the optimism isn’t there for Harvick to get a win this year; his team has not shown many fights so far in 2022. See you next week in Atlanta.