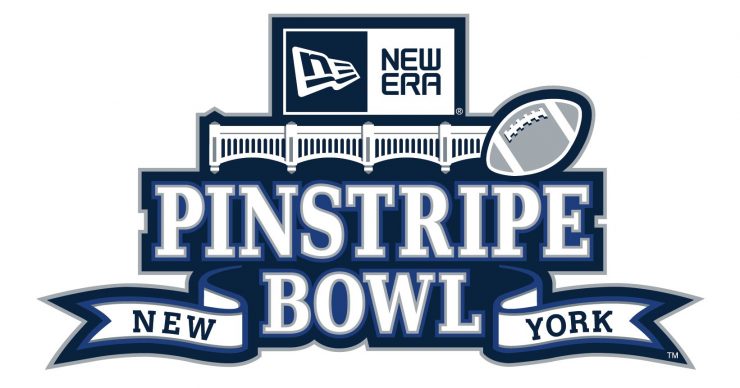 Virginia Tech, led by Interim Head Coach J.C. Price, will make its 34th all-time bowl appearance (13-20) and first in the  New Era Pinstripe Bowl. They will become the sixth different ACC team to play in the contest in the seven years of the  bowl’s partnership with the ACC (Boston College is the only ACC team to have appeared twice). Continuing a  remarkable run of sustained success, Virginia Tech has been bowl eligible for 29 consecutive seasons (since 1993), the

Virginia Tech’s stout defense allowed just 22.9 points per game this season. Junior cornerback Jermaine Waller, who collected a team-high four interceptions (tied for the most in the ACC), landed on the All-ACC Third Team. Junior  linebacker and co-captain Dax Hollifield finished with a team-high 88 total tackles (40 solo), 9.0 tackles-for-loss and 4.5 sacks.

On November 30, 2021, former Penn State defensive coordinator/linebackers coach Brent Pry was named the next  head football coach at Virginia Tech. J.C. Price will remain in his current position for the Hokies at the New Era Pinstripe  Bowl. Pry returns to Virginia Tech after working as a defensive graduate assistant for the Hokies from 1995-97.

“It’s our privilege to represent the Atlantic Coast Conference as Virginia Tech makes its first-ever appearance in the New  Era Pinstripe Bowl,” said Virginia Tech Director of Athletics Whit Babcock. “I know how important it was for Coach  Price and our players to extend our season and we’re certainly glad that their efforts are being rewarded. The holiday  season is always a special time to visit New York City and I’m looking forward to seeing Hokie Nation cheering on our  team against the University of Maryland.

VIRGINIA TECH AND MARYLAND TO PLAY IN THE 2021 NEW ERA PINSTRIPE BOWL, cont.

“Virginia Tech has long valued its relationship with the Yankees organization, and we’re pleased to finally have the  Hokies participate in this bowl game at Yankee Stadium. The Virginia Tech community will always be grateful for the  generosity and graciousness that the Yankees organization and the Steinbrenner family extended to us following the  2007 tragedy on our campus.”

Following the tragic events of April 16, 2007, the Yankees made a $1 million contribution to the Hokie Spirit Memorial  Fund. On May 23, 2007, the Yankees invited the Virginia Tech Police and Rescue Squad to Yankee Stadium in a sign of  solidarity with the Hokies. Then-Virginia Tech President Charles Steger threw out the ceremonial first pitch and the Yankees wore a “VT” patch on the left side of their caps for the game against the Boston Red Sox. In March 2008, the  Yankees visited the memorial to the April 16 victims and played an exhibition game against the Tech baseball squad in  Blacksburg.

“I’m honored to lead our team to New York for the New Era Pinstripe Bowl,” said Virginia Tech interim Head Coach  J.C. Price. “The Hokies have a proud bowl tradition, and we’re excited to showcase our football team in the Big Apple.  We have a very resilient group of players who stuck together through a number of challenges this season. I know that  they’d like nothing better than to conclude our season on a winning note against a Big Ten opponent like the  University of Maryland.”

Maryland will play in its first bowl game under Head Coach Michael Locksley. The 28th bowl appearance in program  history will be the Terrapins’ first at the New Era Pinstripe Bowl, as they become the seventh different Big Ten team (in  seven games of the bowl’s partnership with the conference) to play in the game. The New Era Pinstripe Bowl will mark the  program’s first bowl game since 2016. Dating back to 2002, the Terrapins are 5-4 in bowl games.

“We are thrilled to be playing in the Pinstripe Bowl at one of the most iconic stadiums in the world of sports, Yankee  Stadium,” said Barry P. Gossett Director of Athletics Damon Evans. “It is special to play a bowl game in the New York  metro area, which has more than 40,000 Maryland alumni. This is the perfect setting for our program as we continue our  ascent under Coach Locksley. He will have our team prepared and ready for competition against Virginia Tech, a familiar foe from our days in the ACC. December 29 is going to be a special day for all of Terp Nation.”

“We are excited to be selected to play in the New Era Pinstripe Bowl,” said Maryland Head Coach Michael Locksley. “Returning to postseason play is the next step in the upward trend of our program. I’m thrilled that our players, especially  the seniors, will have the chance to play inside Yankee Stadium and experience all of the special events that come with a  bowl trip. I’m also happy that our fans will have the chance to drive up to New York City and watch us take on Virginia  Tech, a former ACC rival.”

VIRGINIA TECH AND MARYLAND TO PLAY IN THE 2021 NEW ERA PINSTRIPE BOWL, cont.

“We are delighted to host the student-athletes, staff and families of Virginia Tech and Maryland at the 2021 New Era  Pinstripe Bowl,” said Mark Holtzman, Executive Director of the New Era Pinstripe Bowl. “The holiday season in New  York City will provide an incredible atmosphere for the entire week of bowl-related activities, and Yankee Stadium will shine a spotlight on two terrific teams that have such devoted fans and alumni. We are excited to have the return of  college football at Yankee Stadium and look forward to adding to the history and tradition of ‘New York’s Bowl Game.’”

“We are excited to again be a part of the college bowl season at Yankee Stadium,” said Josh Feine, New Era Cap Co. Inc.,  Vice President of Sports Marketing, Corporate Partnerships & Business Development. “The New Era Pinstripe Bowl is  a unique New York City holiday tradition, and we are thrilled to share in the event with the Yankees, Virginia Tech and the  University of Maryland.“

Courtesy of New Era, fans can enjoy the 2021 New Era Pinstripe Bowl Collection, which includes headwear and apparel  options for both men and women and features team logos and Pinstripe Bowl logos. Fans will be able to purchase  39THIRTY® stretch fit caps, t-shirts, sweatshirts, a visor and knits at Yankee Stadium during the game or on neweracap.com  for a retail price range of $24.99-$61.99 USD.

This year’s game will be nationally televised by ESPN and broadcast by ESPN Radio.

Tickets for the New Era Pinstripe Bowl are currently on sale at www.pinstripebowl.com, the official website of the New  Era Pinstripe Bowl, and www.ticketmaster.com. For up-to-the-moment information regarding the game, fans are also  encouraged to follow the Bowl game’s official Twitter and Instagram accounts – @PinstripeBowl.

About the New Era Pinstripe Bowl

Established in 2010, the New Era Pinstripe Bowl has featured some of the most memorable moments in recent college  football history. Known as “New York’s Bowl Game,” it is played at the world-renowned Yankee Stadium, which is home  to the New York Yankees, New York City Football Club and many other sporting, cultural and business events. The 2021 New Era Pinstripe Bowl will take place on Wednesday, December 29, at 2:15 p.m. (ET), featuring Virginia Tech from the  Atlantic Coast Conference and the University of Maryland from the Big Ten Conference. The game will be nationally  televised by ESPN and broadcast by ESPN Radio.