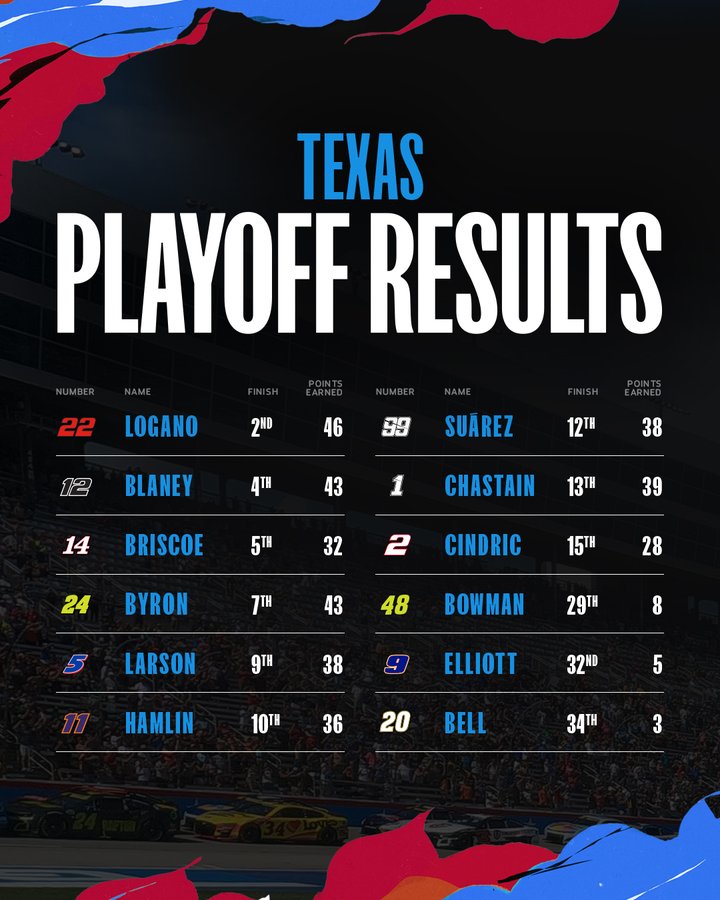 The Round of 16 has come and gone, 4 drivers down and 12 remain. Bristol, much like the other races in the Round of 16, was not kind to the championship contenders and showed favor to a non-playoff driver, Chris Buescher. RFK Racing should be really happy about that victory. With three races down, one thing seems to be true so far, the playoff drivers are all over the place and non-playoff drivers are winning. The 1.5-mile D-shape oval may be more of the same. NASCAR came to Texas for the All-Star race and Ryan Balney won the race. Yes, it was under controversial circumstances; but he is credited with the win. NASCAR has not been back since then, so anything can happen Sunday. Before we get into predictions, let’s have a look at the playoff standings and take inventory of who is still in and who is out.

Going into Texas, Chase Elliott has a commanding lead over Joey Logano. But most fans might be looking at who was knocked out last week. Kyle Busch is a real eyebrow raiser, but his luck in the last three races has not been great and his knockout makes sense. Reddick is another shocker although not as much as Busch. Reddick has had a great season, though he may have wanted to go further into the playoffs. Dillon and Harvick being knocked out early is not shocking: Dillon has not been consistent, and his Daytona win was the reason he got in and Harvick is more or less the same as Dillon, although his two wins were fun to watch. With that said, who are my picks for Texas? Honestly and truthfully; with how the playoffs have played out, choosing a winner seems to be a crapshoot. Who you expect to do well, runs into trouble. However, Ryan Blaney, Joey Logano, and (just for fun) Brad Kesolowski. Ryan Blaney won the All-Star race this year and that has been the only time NASCAR has been to Texas with the Next Gen car. He is starting fourteenth, but he has the talent to get it done. Joey is starting second Sunday and, of the Penske drivers in the playoffs, he stands the better chance to win. He has won at Texas before and with him second in points, he may go out and win the race to get ahead on everyone else. Kesolowski is a wildcard choice, mainly because he has pole for the races and the playoffs have been all over the place. Can Kesolowski make it four in a row for non-playoff drivers or will the playoff drivers get their act together and win races; tune in Sunday at 3:30 pm EST on USA for the Autotrader Echo Park Automotive 500. Let’s go racing!