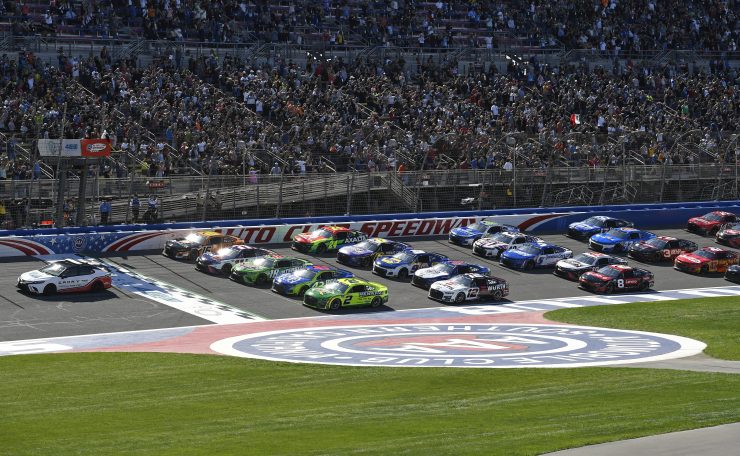 The reigning Cup Series Champ Kyle Larson began his title defense by winning the Wise Power 400 in California. This was the race the fans wanted and needed, with plenty of quality passes and lead changes throughout. It was a sold-out crowd that welcomed NASCAR for the first time since March of 2020, just two weeks before the country went into lockdown to curb Covid-19.

Tyler Reddick once again had a dominant car, leading a race-high 90 laps and winning both stages before blowing a tire and getting sideswiped by William Byron on lap 152. Erik Jones seemed to be the only car that could keep up with Reddick before that point, with a car that could run the bottom or the top of the race track. When Reddick faltered, I expected Erik Jones to take over and run away with the win, but I believe an adjustment was made to his car that set them back a little.

Chase Elliott had recovered from an early spin and impact with the wall to fight for the lead, and with 20 laps to go, Larson and Joey Logano three-wide; Larson tried to block his move to the outside but made contact and sent Chase into the outside wall. Larson said over the radio that he did not know that Chase was there, but the replay would indicate that the move was a late block and not a simple move to prepare for the coming turn. Chase was upset with his teammate and showed his frustration by pinching Larson as he lapped him soon after.

There were ups and downs all day by several drivers. Some cars had spun, made significant contact with the wall, and still raced the pack for position all day. Daniel Suarez made contact with the wall just before the last caution but still managed to be in a position to win in the closing laps. I would say that to me indicates that this car is much more flexible than the Gen 6 car from last year. The Gen 6 car was notorious for having catastrophic failures with minimal contact on a fender well, so this was an excellent look for the future of NASCAR racing.

I have to give my game ball to NASCAR and the Next-Gen Car’s finished product. The racing was improved, the cars performed exceptionally well after contact and blown tires, and the draft seemed to play a minor role in racing lines. The goal was to close the gap between the big four-car teams and the smaller single-car teams, which was on showcase today. Austin Dillon, Erik Jones, and Daniel Suarez are all on two-car teams, and those drivers finished 2nd through fourth, respectively. Daniel Hemric finished 9th in a two-car team that is still very new to Cup Series racing, and Ricky Stenhouse, Jr. finished 10th as the lone single car team in the top 20.

Big shout out to Live Fast Motorsports on finishing 22nd. This is a big deal to this team. They are underfunded, lack the sheer manpower of the bigger teams, and driver BJ McLeod needed an excellent finish to help bring in some big-name sponsors going forward. Another driver that outperformed their prediction was Garrett Smithely, who finished just before McLeod in the 21st. Next week, the crew heads to Las Vegas for part two of the West Coast tour, followed by the Championship 4 rematch in Phoenix. The season is young but beginning to take shape already. See you guys’ next week.