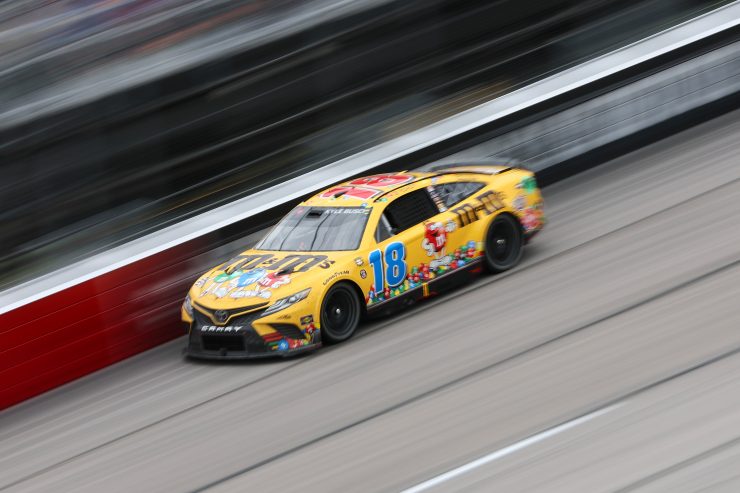 It was a regular night around the house. The kids were being crazy, the dogs were trying to eat the cats, and the cats were trying to eat the kids. Honestly, the kids can find their own place on the food chain. Anyway, my nightly routine is getting in bed and checking Facebook and Twitter for updates from around NASCAR. I read a lot of what fans say about each driver and race, and most comments are just complaints about something. I am in a few NASCAR fan groups on Facebook, none of which post much positive about NASCAR in general.

So I’m scrolling through posts, and I come across a post from a woman named Kim Wherley. Kim asked folks in the group what tickets she should purchase for the August 14 Richmond race. Her mother is 85 years old and a huge fan of Kyle Busch. Now let’s all be honest, I have never been a fan of Kyle. Kim wanted to get the right tickets to line up a picture for her mother with Kyle. Gigi has a rare blood cancer and a few other ailments that make Kim worry that the clock is ticking for time with her mom.

I see this post, and it pulls me right in. I lost my mother when I was 14, and I had never known my father. My Aunt and Uncle took me in when my mother passed, and they are Mom and Dad now, but the hole of losing my biological mother can never be filled. So instantly, after reading the post, I replied in the comments that I had a few contacts for Joe Gibbs Racing and that I would see what I could do.

So the following day, I emailed the Public Relations Coordinator for all four Joe Gibbs Racing drivers and asked them for help. Those folks are always so busy that I didn’t wait for a reply. I took it to Twitter and attached a picture of the post that I read. I tagged Kyle Busch and asked him for help to get a pic for Gigi. It wasn’t even 15 minutes, and my phone was exploding. Kyle had retweeted my post and was asking for contact info for Kim and Gigi.

Kyle Busch has always gone above and beyond for his fans, and as I mentioned before, I have never been a fan of his. After reading everything that he is doing for Kim and her mother, I have drastically changed my stance on Kyle as a driver and a person. I think that Kyle compares closely to a paid actor in a movie. They have to have this front about them, pretending to be a certain way in front of the camera, but behind the curtain is a kind and caring human being. I never thought I would ever say that about Kyle “Rowdy” Busch.

Kim and Gigi have been given Toyota Suite tickets for the fall Richmond Race, and Kyle will be making a trip up to see Gigi and get a few pics with her to further complete her bucket list. I am so happy for Kim and her family to be given the opportunity to spend an amazing race weekend with Gigi and for her to meet her favorite driver. “There are still good people in this crazy world we live in, and do not ever underestimate the power of social media!!!”. That was a quote from Kim’s wall, and I couldn’t agree more. When I said I would see what I could do, I didn’t expect Kyle to take care of the situation the way he did. Kyle turned out to be a good person after all.