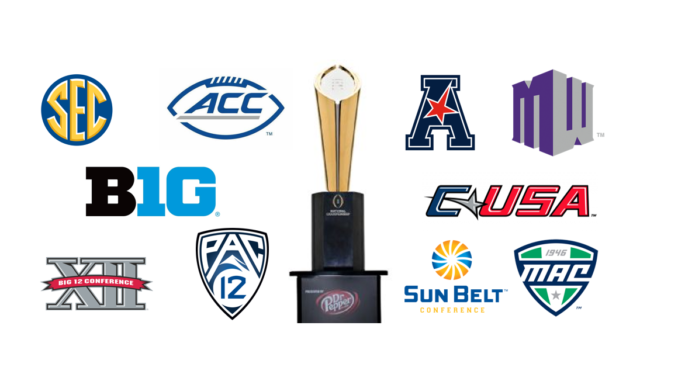 The College Football Regular Season has ended; a few select teams are preparing for their respective Conference Championship game, while some have to sit back and watch the possible carnage unfold. For teams like Notre Dame, their Playoff chances hinge on dominoes falling in certain directions, the downside of not playing for a Conference Title of their own.

Let’s start with the undefeated teams of Cincinnati and Georgia. No teams control their destiny more than these two; a win clinches a spot in the College Football Playoff. Cincinnati will play Houston for the AAC Championship, and the experts are picking Cincy to win by 10.5 points, but I think an upset is coming. The Bearcats’ one quality win is against Notre Dame, who can’t make much of a case as being quality because of their lack of strength on their schedule. I think Houston has the defense to hold Cincinnati under 30 points, and Houston has plenty of offense to get to 31 or more.

As for the SEC Championship, the experts are giving Georgia 6.5 points over Alabama, but the Tide are in a funk on both sides of the ball. Their biggest concern will be protecting Bryce Young against an aggressive front seven for the Bulldogs. If you break down the tape this season, Georgia’s defense gets pressure without sending more than four. And an area of major concern is Right Tackle for the Tide. The most points the Dawgs have given up all year is 17 to Tennessee, and the last touchdown was garbage time at best. I just don’t see many matchups that Alabama can exploit offensively, and their defense has been very suspect all season long. I have Georgia winning 41-13 and clinching the #1 seed in the Playoffs.

The ACC Championship will be a shootout between Wake Forest and Pittsburgh. Both teams have lived off of explosive plays and momentum, which will be the case here as well. I think Wake Forest was humbled after the loss to Clemson, learning from mistakes that cost them 21 points off the board. For Pitt, this is Kenny Pickett’s last chance to showcase his Heisman campaign and rocket into the First Round talk for the upcoming NFL Draft. Pitt walks away with the ACC Title in a 51-49 gun show.

The Big 12 Title isn’t as easy to pick. I like both teams’ defenses, which is odd to say about any team from the Big 12 Conference. Baylor has better linebackers, Oklahoma State has a much better D-Line. The over/under is projected at 46.5, and I would take the under for sure. The regular-season game between the two produced 38 points, and I think this game will be on par with that, with Oklahoma State winning 24-20.

The Big Ten Championship is where I see the hangover game happening. Michigan is coming off their biggest win under coach Jim Harbaugh, knocking off Ohio State in dominant fashion. So often, we see teams coming off such high notes and having massive letdown games afterward. Look at Michigan State; a week after beating, Michigan played their worst game of the year against Purdue. This game will be a defensive struggle from the start. Iowa wins this game by holding the Wolverines to 14 points. I am calling it Iowa over Michigan 17-14.

Oregon gets another shot at Utah, but their playoff hopes are all but dashed. Even with a convincing win, the Playoff Committee would have a hard time making a case for the Ducks to make it, even with upsets. Utah is favored this time and once again should take care of business and lock up the PAC-12 Title 38-31.