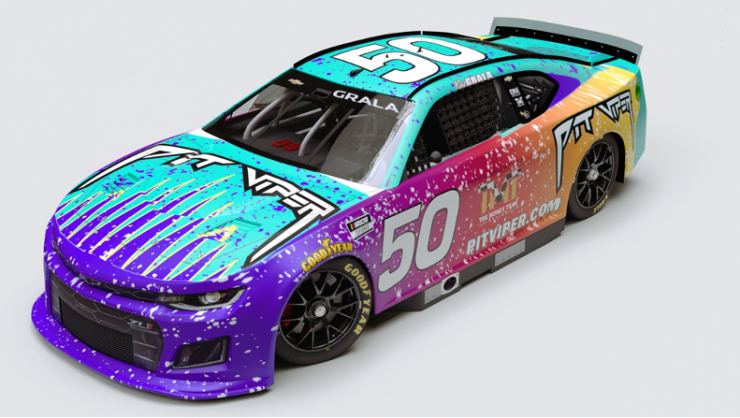 February 1, 2022–Las Vegas, NV. — Known worldwide for his bold moves and ostentatious flare, legendary five-division world champion and boxing Hall of Famer Floyd “Money” Mayweather shook up the sporting world again today by announcing he will partner with sunglass giant Pit Viper when The Money Team Racing (TMTR) makes the long-awaited NASCAR Cup Series debut of its No. 50 Pit Viper Chevrolet at the Daytona 500 on February 20, 2022.

One of the fastest fighters in boxing history, Mayweather will have driver Kaz Grala behind the wheel of his new NASCAR NextGen Chevrolet Camaro ZL1 with an engine from ECR at the 64th Annual Daytona 500, held at the iconic Daytona International Speedway in Florida. “I love fast cars and I love to compete. I know NASCAR will not be easy, but anything easy isn’t worth doing to me,” Mayweather exclaimed. “With that being said, this move into auto racing seems to be a perfect fit for the Mayweather brand.” Kaz Grala will lead the fight on the track as TMTR’s driver for select races in 2022.

Grala has already proven success at Daytona as the youngest NASCAR winner in the track’s storied history. The 23-year-old driver has finished in the top-10 in half of his NASCAR Cup Series races to date, including his debut when he drove through the field to an impressive seventh-place finish on the Daytona Road Course. “It’s an honor to be behind the wheel for Floyd Mayweather’s entrance into NASCAR. It’s a really exciting time in our sport as it globalizes and reaches new audiences,” said Grala. “I know Floyd is here to win, and I absolutely feel that everyone involved in this program is capable of making that happen.

We know we will need some time to grow together as a new organization, but I couldn’t be more thrilled to be a part of building this team from the ground up.” Calling the shots at the top of the pit box will be NASCAR Cup Series winning crew chief, Tony Eury Jr. The co-owner of TMT Racing, William Auchmoody, an associate of Mayweather’s and a longtime member of the NASCAR community, will serve as the team’s general manager. Brent Johnson of ONE Entertainment will handle Brand Mayweather activations along with James “P-Reala” McNair, president of The Money Team.

“This deal has been a long time coming and we are finally at the starting line.” said William Auchmoody. “Every time we thought we would be able to hit the track, something happened, including a global pandemic. One thing I have learned from Floyd Mayweather is that sometimes your best offense is a great defense and now we are here going to our first race at this year’s Daytona 500. We are very excited to be racing!”StarCom Racing’s Michael & Matt Kohler and Bill Woehlemann have a vested interest in the team as well.  “We are extremely thankful to TMTR for the opportunity to be a part of this team and are excited to join them on this journey,” said Bill Woehlemann.