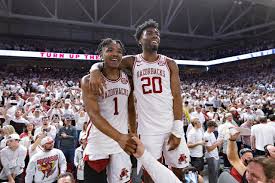 SEC Tournament Through the Tusks of The Hogs

The men’s basketball teams of the SEC have dropped anchor in Tampa Bay, Florida, and will be heating the Arena from March 9th-13th for this season’s championship. For all 13 schools, this is a chance to dance into the NCAA Tournament by winning on Sunday. Some schools, such as the Arkansas Razorbacks {24-7,13-5 SEC}, already have a ticket to the dance no matter how this trip to Tampa plays out. For head coach Eric Musselman and his hogs, the path to championship Sunday isn’t the easiest. Can the hogs keep this historical season going? Let’s look at the path to the SEC championship through the tusks of these feisty hogs to start the tournament.

WHOM WILL THEY PLAY?

In the 2022 tournament, the hogs will receive a bye and not play until Friday at roughly 3 pm on SEC Network. With them having this bye, I want to look at whom they have a chance to play and the season history of these teams. The tournament’s first game will tip-off on Wednesday, March 9th, at 6 pm when the #13 Ole Miss Rebels take on the #12 Missouri Tigers. The #5 LSU Tigers await the winner of that game for a Thursday afternoon tip, and Arkansas playing the winner on Friday. It sounds like a lot, but Arkansas, even with the bye, will still have to win three games to win it all. Long story short, they have a chance to play Missouri, Ole Miss, or LSU to move on to the Semifinals on Saturday. How did the hogs do during the season against these teams?

Missouri has been a thorn in the Razorback’s sides in many sports, but basketball is not one of them. Missouri comes into the tournament with an 11-20 overall record and is 5-13 in conference play. This season the hogs have taken care of business in both meetings. On January 12th in Bud Walton, the hogs blew the Tigers out of the gym 87-43. The second meeting between these rivals came on February 15th, with the hogs winning 76-57 in Columbia.

Head Coach Kermit Davis and the Rebels have struggled this season in Oxford. After a nice home win against a now charging Memphis team, his rebels finish the regular season 13-18 on the season and 5-13 in conference play. The Razorbacks and Rebels met only once in Oxford, and Arkansas prevailed 64-55.

LSU and Arkansas. Two teams and fanbases that flat out do not like each other. Any sporting event between these two teams will leave it all on the floor. LSU comes into the tournament with a 21-10 overall record and an even 9-9 in SEC play. This season has been wild between these two teams. The first two went down in Baton Rouge on January 15th, just three days after the above-mentioned Missouri win. Arkansas would go into hostile territory and come away with a 65-58 victory. If we thought the first battle was great, we didn’t know what would come in Fayetteville. On March 2nd Arkansas and LSU would take the basketball world on one heck of an emotional roller coaster! In a back-and-forth battle, Arkansas would win a nailbiter 77-76.

When you analyze this season bracket, the path for Arkansas gets even more complicated with the possibility of Auburn, Kentucky, or Tennessee. The bracket projections have Arkansas in the 4 or 5 seed in the tournament, but for Eric Mussleman and the Hogs, the season goals have not been completed. This team all season has shown they shine brightest in their biggest games. An SEC Tournament Championship would have them dancing to their BIG dance.