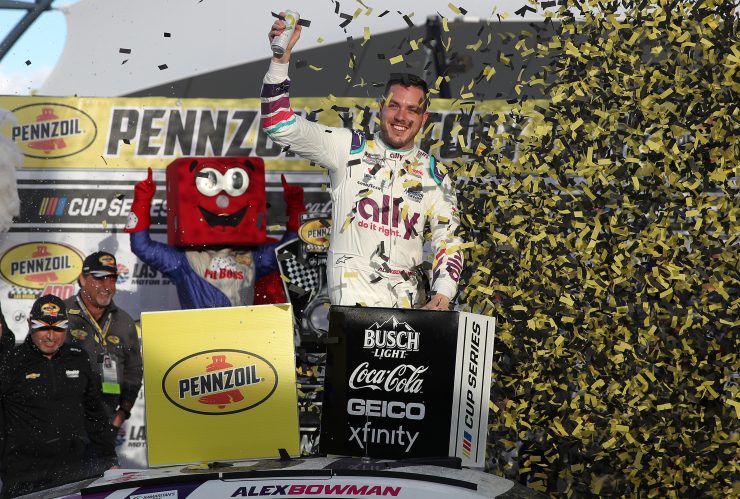 Team Hendrick wins for the second week in a row, with Alex Bowman winning with the overtime restart finish. Once again, Kyle Larson was right there to steal the race like he did last week at Fontana but came up just short. The race was dominated not by cars but cautions. It seemed that cars were bottoming out over the tunnel in turn 2, causing several drivers to lose control and spin out.

Kyle Busch and Martin Truex, Jr. had pulled away from the rest of the field with less than five laps to go, and it looked as if Busch would hold off Truex for the win. When the caution came out, every team on the lead lap elected to pit and take tires, but not every team had a fresh set of tires to put on the car. The first three cars out all took two right-side sticker tires, or brand new tires, while everyone else in the top 10 took four scuff tires, which are slightly used tires that are scuffed up. The scuffs versus two brand new tire debate can be a great conversation, but the variable was too easy; there would only be two green flag laps at the most without another caution.

The debate can be settled with ease; the drivers that took two tires finished the top two, the guys that took four scuff tires couldn’t manage to get around the front row drivers on the restart. If there had been any more than six laps left, I think the winner would have been Kyle Busch, but I tip my hat to the Hendrick drivers for using strategy to make the winning pass. Alex Bowman had a strong car all day, and it wasn’t like he lucked his way into victory lane either.

I am enjoying the racing that the new car has provided. Erik Jones once again had a solid run, but a late crash derailed his finish. Ross Chastain also had a fast car, I expected him to play a more significant part in the finish, but the scuff tires may have hurt his drive. Drivers like Aric Almirola have come back into the spotlight in his final season. It seems like the Stewart-Haas Organization is back and ready to compete for race wins.

In closing, I would like to give a shout-out to another strong run by Tyler Reddick. The finishes will come around for him, but this race was different than last week, where he had a dominant car. He struggled at times in this Las Vegas race but managed to get a top 10 finish and provide some momentum going forward. I continue to be impressed with the Richard Childress Racing drivers. Both cars have speed and look good on long runs. Next week, the Cup Series crew drives to Phoenix for the last race of the West Coast tour before heading to Atlanta, where a new track surface and configuration should provide excellent racing. See you all then.